Laminitis in a horse!!

The following radiographs are from a gelding that has been lame for nearly 1 year. The gelding has been treated for laminitis/founder and despite efforts by the farrier and veterinarian, the gelding's conditions has worsened. He is non-weight bearing on one forelimb at the time of my exam. The right front foot is imaged in Figure 1 and the left front foot in Figure 2. In Figures 3 and 4 the palmar angle (angle "A") is measured in both front feet. The palmar angle corresponds to the angle that the bottom or palmar surface of the coffin bone makes with the horizon. In both front feet, the palmar angle measures approximate +23-25 degrees. Normally, the palmar angle may range between zero to +5 degrees. Abnormal palmar angles may be negative or greater than +7-8 degrees. However, even though the right and left front feet share the same palmar angle, it is for two very different reasons!

The right front foot has zero degrees of coffin bone rotation however the palmar angle is the same as in the left front foot. This due to coffin joint contracture and is the definition of a "Club foot". In Figure 6, the lines corresponding to the hoof wall and coffin bone are parallel and as such angle  "A" equals angle "B". Figure 7 diagrams the concept of coffin joint contracture that results in an angle of contracture (angle "A"). Typically, a club foot or coffin joint contracture does not result in non-weight bearing lameness but rather a life long commitment to proper shoeing and trimming. In this case, first glance of the radiographs might be deceiving because both front feet have an abnormal palmar angle, but it is the left front foot with the coffin bone rotation and life threatening laminitis! The deep digital flexor tendon was transected in the left front limb and follow-up radiographs will follow!
To be continued......


In Figure 2 and 3, there are radiographic changes that indicate osteo-arthritis of the tarsal metatarsal joint space. These changes were noted during a prepurchase exam of a 5 year old horse. The horse was sound during the exam and did NOT respond to hock/stifle flexion. The million dollar question is what to recommend to the buyer based on these findings. In my clinical experience, most horses with these changes will eventually need intervention via intra-articular cortisone injections. I believe that horses with these changes are MORE likely to need hock injections than those with "normal" radiographs. However, these findings are not necessarily a negative prognostic indicator with regards to the horse's future performance.

With management, i.e, hock injections, these horses can compete at the highest level and succeed!  As such, these findings do NOT constitute a FAILING grade during the prepurchase exam however the buyer needs to be prepared for the strong likelihood of routine "maintenance". This can easily result in hundreds to thousands of dollars per year that should be considered into the price of the horse.

Posted by Michael Porter DVM at 10:24 AM 0 comments

Proximal Suspensory Desmitis in a Horse

The ultrasound images below are from a teenage gelding that presented for a 3 month history of mild, forelimb lameness. The lameness would improve with rest but would return soon after the gelding was returned to work. On physical exam, the proximal suspensory palpated sensitive, just below the carpus (knee) of the right forelimb. The gelding was not lame in a straight line however when lunged in a circle to the left, a mild lameness (2/5) was noted in the right forelimb. The lameness improved approximately 50% after blocking the lower limb however when the proximal suspensory ligament was blocked, the gelding was sound. Ultrasound exam of the tendons and ligaments revealed a focal area of decreased echogenicity (dark spot) which was consistent with inflammation and edema within the proximal suspensory ligament.


In Figure 1, there is a cross sectional image of the superficial flexor tendon (SDF), deep digital flexor tendon (DDF), distal check ligament, and the proximal suspensory ligament. This image was made approximately 10cm below the knee or carpus. In Figure 2, the same area is imaged in cross section and in longitudinal plane. The same lesion (dark spot) can be seen in both images which is consistent with a "real" lesion versus an artifact. In the longitudinal view (right image in Figure 2), the origin of the suspensory is highlighted by the blue arrows and the edema is noted by the dark fibers just above the blue arrows. In Figure 3, the cross sectional image is slightly obliqued to visualize the inside or medial aspect of the limb. The lesion within the suspensory ligament is more apparent in this image and is represented by the dark blue circle within the yellow circle (suspensory ligament) in Figure 3.


The history and lameness exam findings are "classic" for a forelimb proximal suspensory ligament injury. Often the lameness is most noticeable when the affected limb is on the outside of the circle and the lameness will improve temporarily with rest. The prognosis for this injury is "good" however will require rest, ice therapy, corrective shoeing and a specific rehabilatory program. Adjunct therapies include shockwave treatment and platelet rich plasma (PRP) injections.

Gastric Ulcers in a horse

The endoscopic images below are from a teenage gelding that presented for a complaint of aggressive  behavior while grooming. The gelding was not displaying any classic signs of colic nor was there a decline in food intake or a report of weight loss. When the stomach was examined, several bleeding ulcers were noted surrounding the pyloric sphincter. This region of the stomach includes the passage from the stomach into the small intestine. The gelding was treated with 45 days of Gastrogard and returned to normal behavior. 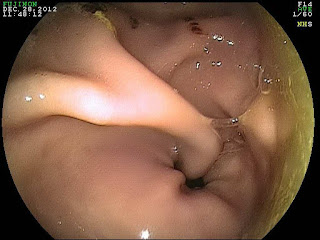 The important message from this case is that gastric ulcers in horses can present like most anything! Classically, they present as low grade colic associated with feeding plus or minus weight loss. However, in my experience clinical signs associated with gastric ulcers have included poor performance, dull hair coat, excessive water intake, sour behavior under saddle, aggressive behavior while being groomed, colic, parking out, frequent posturing to urinate, teeth grinding, and weight loss. 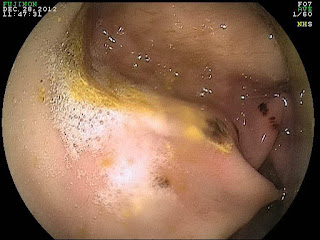 I strongly recommend a gastric exam which includes visualization of the pyloris to determine if gastric ulcers are the source of the clinical complaint. This involves 24 hrs of fasting and a trained clinician with a 3 meter gastroscope. If ulcers are discovered, the only treatment proved to be effective is Gastrogard medication for at least 30 days! I typical recommend 30 days of a full dose followed by 2 weeks of a half dose. 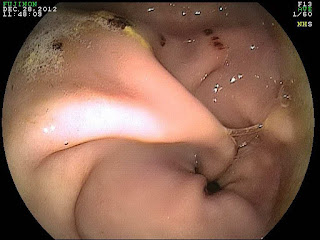 Posted by Michael Porter DVM at 12:27 AM 0 comments