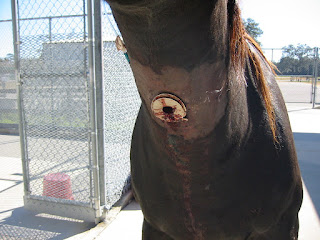 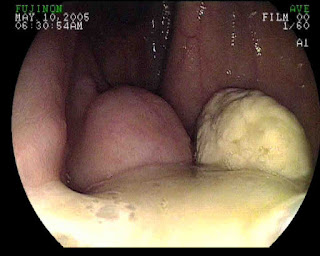 
The disease process that may cause throat latch swelling AND limb swelling is commonly known as Equine Strangles. This disease is caused by a bacteria known as Streptococcus Equi subspecies Equi. Most commonly it results in enlargement of the lymphnodes within the throat latch area that may narrow the airway of the horse, hence the term "strangles". In severe cases, a temporary tracheotomy is necessary to save the horses life! (Figure 1). These lymph nodes may rupture and drain purulent debris from the outside or from within the guttural pouches (Figure 2). These horses are typically febrile, depressed, and highly contagious! Occasionally, the horse will develop a hyper-immune response known as purpura hemorrhagica. This immune response to the bacteria results in severe swelling of one or multiple limbs (Figure 3)  and can be triggered by the vaccination of a horse that was recently sick with the disease. 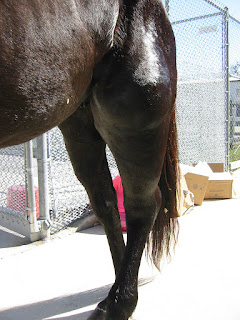 For more information check out the following links:

http://www.aaep.org/strangles.htm
Posted by Michael Porter DVM at 7:35 AM 2 comments 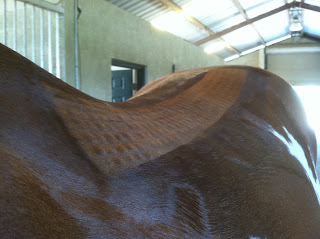 These small bumps were caused by micro-injections of medication just under the skin, or also known as Mesotherapy. This treatment has been used effectively for over 30 years in humans and horses. The primary objective of this treatment in horses is to block or break the pain cycle associated with chronic back pain.

Technically, mesotherapy treatment stimulates the mesoderm or middle layer of skin by stimulating the giant fibers present within this layer of skin. Commonly, a combination of lidocain and dexamethasone is injected via multiple extra small needles (30g). These micro-injections result in stimulation of the giant nerve fibers located within this layer of skin that also communicate with major nerve tracts within the spinal chord. These nerve fibers INHIBIT the conduction of pain signals to the brain.

Typically, one or two mesotherapy treatments are applied to a horse's back and often are combined with shockwave treatments. Mesotherapy is used primarly as an aid to alleviate back pain followed by treatment of the primary cause of the back pain/spasm. This typically involves a source of lameness in either the forelimbs or hindlimbs. In addition, osteo-arthritis of the thoraco-lumbar spine and "kissing spines" are causes of chronic back pain.

The response to mesotherapy is usually within 2-3 days and may last for 3-4 months.
Posted by Michael Porter DVM at 8:00 AM 0 comments 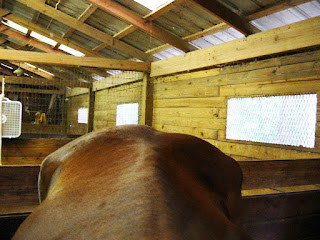 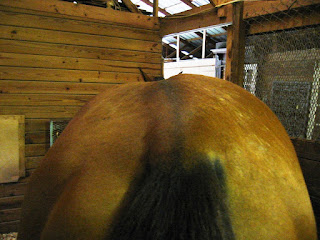 The pictures above are those of a horse with an asymmetric pelvis. Specifically, the left tuber sacrale is lower than the right. Less severe varieties of this problem have been described as "hunters bumps". The appearance of asymmetric tuber sacrale or "hunters bump" is in indication of a pathological problem within the pelvis/sacrum area. In the case above, the gelding suffered a fractured pelvis that was diagnosed via ultrasound. This patient presented for non-weight bearing lameness however many with only mild changes do not present for lameness but rather "poor" performance. 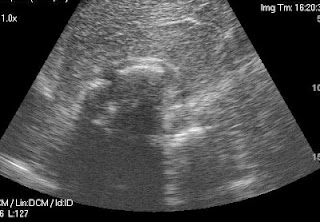 In the image above, the left gluteal region was examined via ultrasound and an irregular margin was noted along the body of the ileum. Note the "step" along the bony margin in the pic below. 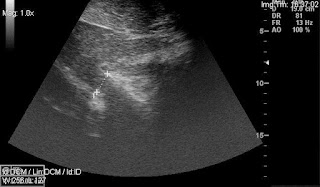 The suspensory ligament has been significantly stretched and strained, resulting in the "dropped fetlock" conformation seen below. The suspensory ligament (blue structure in drawing below) originates just below the hock in the hind limbs and the carpus in the forelimbs. The ligament splits into a medial (inside) and lateral (outside) suspensory branch. The split occurs approximately half way down the metatarsus. Each suspensory branch inserts on a sesamoid bone at the level of the fetlock and play a role in "suspending" the fetlock. For the fetlock to drop, the suspensory branch and body have been strained and maybe even ruptured. For definitive diagnosis, an ultrasound exam is performed that will evaluate the entire suspensory ligament. If the process is slow (months to years), it may result in reduced performance and low grade lameness. However, if sudden, significant lameness is associated with the limb or limbs affected. Unfortunately, this is a progressive condition that will ultimately result in retirement of the horse and may be life-threatening. Management of this condition includes reduced exercise, daily ice therapy, corrective shoeing, and daily pain management. This condition carries a poor prognosis for return to work and a guarded prognosis for over-all soundness. 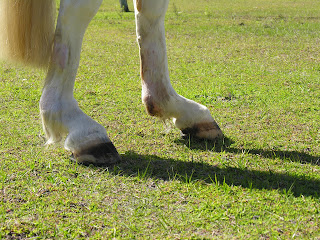 The blue structure depicts the suspensory ligament in the forelimb. Note the upper region is one structure (body) which then splits into two branches.

These are known as "fish tail" shoes and are quite effective in reducing the strain on the suspensory ligaments. For obvious reasons, this type of shoe, with significant heel extension, can only be used in the hind limbs.