Severe Roaring in a Horse!!

A teen-age mare presented for respiratory noise during exercise and poor performance. The mare had made noise during exercise for the past 2-3 years WITHOUT poor performance. Interestingly, the mare has always been resistant when cantering to the RIGHT! Recently, it was noted that the mare demonstrated signs of exercise intolerance at the canter. During the exam, the mare was asked to canter on a lunge line and she carried her head to the outside of the circle with her nose turned up. After 1-2 minutes of cantering to the right, it became increasingly more difficult for her to catch her breath and she would occasionally cough/gag violently!.

The mare was scoped immediately after exercise and complete paralysis of the left arytenoid was discovered (Figures 1-2). During inspiration, the left arytenoid was across mid-line (yellow line) and obstructing at least 50% of the mare's airway (Figure 2).  It is highly likely that during heavy exercise, the increased negative pressure during inspiration would cause the paralyzed arytenoid to completely cover the airway and prevent the mare from breathing!

In addition, while scoping the horse, the mare tended to displace her soft palate in such a position that the epiglottis was trapped below (Figures 3-4). When this occurred, the mare instantly began to cough/gag until she corrected the displacement! Displacement of the soft palate is not always associated with arytenoid hemipligia but when it does occur may worsen the exercise intolerance. 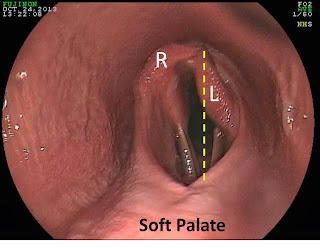 The prognosis for this mare is dependent on additional evaluation by an equine surgeon and the recommended surgical procedure. If she is a good candidate for surgery and the surgery is a success, there is a good likelihood that she will return to work and perform significantly better than before.

Posted by Michael Porter DVM at 9:23 AM 1 comments

Melanoma in a Horse

The images below are from a 20 year-old gelding that presented for the complaint of straining to defecate. Examination of the horse's perineum revealed multiple, lobulated soft tissue masses that were surrounding the anus and under-side of the tail head region (Figures 1 and 2). These soft tissue masses are consistent with cutaneous melanomas in a horse.


In addition, the owner had reported that the horse appeared to be having difficulty seeing from the right eye. Careful exam of both eyes noted the presence of a soft tissue mass within the anterior chamber of the right eye (Figure 3). Although this mass was not biopsied for obvious reasons, it is likely that the mass is a melanoma. Scientific studies report that approximately 14% of cutaneous tumors in horses are melanomas making them relatively common, especially in grey horses. In addition, studies report that 80% of grey horses that are over the age of 15 have multiple melanomas.

The most common site for melanomas is under the tail head and perianal region. Less common sites include base of the ear, periorbital (around or near the eye), lips, and lower limbs. Diagnosis is typically made by simple physical exam however some melanomas grow below the skin surface and a biopsy may be necessary to confirm the diagnosis. Unfotunately, melanomas continue to grow in size and multiply in number. As that happens, melanomas may become an significant problem as in this case in which they are obstructing the horse's anus. If diagnosed early, complete surgical resection is strongly recommended! Alternative therapies include intra-lesional chemotherapy treatment and systemic treatment with cimetadine.
Posted by Michael Porter DVM at 9:16 AM 0 comments

Respiratory Disease in a Horse

A 12 year-old mare presented for a history of increased respiratory rate and effort during the late summer months. In addition, a white discharge was noted from both nares. At presentation the mare had labored breathing, significantly nasal flaring and there was a large abdominal component to her respiratory effort (see videos below). Auscultation of the lungs noted wheezes and crackles and a very mild cough was elicited when the larynx was palpated. The client was of limited financial means and asked that I perform the fewest tests necessary to determine the source of the problem! As such, we opted to begin with an upper airway endoscopy to determine if there was any abnormality within the larynx and if not take a look down the upper trachea. The larynx was normal however there was a significant amount of white debris within the upper trachea (Figures 1-2). This white debris is otherwise known as sputum and is produced within the lungs by inflammatory cells!

The sputum present within the trachea may be due to an allergic airway condition known as heaves/COPD or it may be due to broncho-pneumonia!  These conditions present with similar symptoms but are treated quite differently. Hence making the correct diagnosis is essential! There are several diagnostic tests which will evaluate the lungs and the fluid within the lungs however the one exam that will give you all the information necessary to determine the cause of the sputum and how to treat is a trans-tracheal wash.  The trans-tracheal wash is performed by catheterizing the trachea through a small incision that is made along the ventral aspect of the neck, approximately half way between the horse's throat latch and thoracic inlet. The catheter is passed into the trachea and down to the level of the lungs. A small volume of sterile saline is flushed into the lungs and then aspirated out for analysis. This sample of fluid should contain the sputum noted in the endoscopy exam. The sputum is analyzed for cell type and for the presence of bacteria. If bacteria are found then the sample is tested for which antibiotic is most ideal to treat the pneumonia. This procedure is easily performed in the field with mild sedation and proper technique!

In this case, the mare was noted to be suffering from heaves AND pneumonia. This is not common but does occur and requires very specific medication to save the horse's life!! The horse was treated with a combination of systemic corticosteroids and appropriate antibiotics. Clinically, the horse presented as a typical heaves case however if we had only treated with corticosteroids the broncho-pneumonia would have worsened significantly and potentially caused the death of the patient!!

Posted by Michael Porter DVM at 6:55 AM 0 comments

Take a picture of this QR code with your smart phone's QR code scanner (free app that is easily down loaded from your favorite app store). Once you scan the QR code select the option to open the App in Safari and then save to your phone's/pad's home screen. 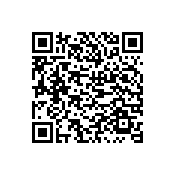