Guttural Pouch Mycosis in a horse!!

The endoscopic images in Figure 1 and 2 are that of a normal guttural pouch in a horse. There are 2 guttural pouches in the horse and their role is not clearly defined. However, there are several very important structures which course through the guttural pouches. These include large veins and arteries plus critical cranial nerves (Figure 2) . Each guttural pouch is divided into a medial and lateral compartment by a unique bone named the stylohyoid bone. This bone articulates with the base of the skull, just below the ear drum and is part of the support structure for the tongue and larynx! As such, when the horse moves its tongue the articulation between the stylohyoid bone and the base of the skull moves as well. The large blood vessels located within the guttural pouch are important for bringing oxygenated blood to the brain and draining deoxygenated blood from the brain. Equally important are the cranial nerves that course through the guttural pouches. These nerves are essential for a proper swallowing reflex, sensation to the face, and balance.

The endoscopic images in Figures 3-5 are from a gelding that presented for a history of purulent nasal discharge that responded to antibiotic treatment. The endoscopic exam was requested as a follow-up to make sure there was nothing lurking in the horse's upper airway. When the right guttural pouch was entered, a large white plaque was noted covering the entire stylohyoid bone. There was minimal discharge within the pouch and there appeared to be mold covering the surface of the plaque!!


In Figures 4 and 5, the proximity of the fungal plaque with the large blood vessels and important nerves can be seen. Normally, fungi seek out vascular tissue and slowly erode the walls of vessels which can result in low grade bleeding and if it is a large artery, sudden death!! Commonly, horses with fungal infection or mycosis of the guttural pouch present with a history of a bloody nose (epistaxis), however this horse did not. When the plaque was disturbed with the scope, the underlying tissue was exposed and the inflammation was evident.  A bacterial and fungal culture was performed on the fluid recovered during the guttural pouch lavage and a fungi was recovered yet the identity is still being worked out. This condition is difficult to treat and is currently being managed with systemic antifungals and guttural pouch lavage. Stay tuned!!!!

Posted by Michael Porter DVM at 7:51 AM 0 comments

Dysphagia and Aspiration Pneumonia in a horse!!

The endoscopy images below were from a young gelding that presented for a history of coughing while eating. In addition, an intermittent nasal discharge was present and the gelding was described as a "hard keeper". In Figure 1, a small amount of feed material was noted along the floor of the soft palate, just in front of the epiglottis. In addition, feed particles were noted on the epiglottis and the walls of the pharynx. These findings alone are not 100% indicative of a dysphagic (difficulty swallowing) horse however, generally speaking there should NOT be any feed material in the pharynx or larynx.


At the very end or deepest region of this image (Figure 3) is the primary bifurcation of the trachea which occurs just in front of the heart. The presence of feed material at this level of the airway is consistent with aspiration and a trans-tracheal wash was performed to confirm pneumonia.

Dysphagia and aspiration pneumonia are quite uncommon in horses and may be secondary to a neuropathy affecting the nerves that control the swallow reflex. The most common disease processes in horses that may affect these nerves include equine protozoal myeloencephalitis (EPM), cervical spine trauma, trauma to the guttural pouches, temporohyoid osteopathy (THO), strangles, encephalitis, and basisphenoid bone fracture. Unfortunately, the prognosis is poor for horses with this condition. The likelihood that they will recover their normal swallow reflex, regardless of the cause, is low!  In addition, the aspiration pneumonia that results from the dysphagia  is a recurring problem that typically results in their failure to thrive!

The radiographic images below are from a young gelding that was found by the owner walking "strangely" in the pasture. There was a large swelling present along the neck region, just behind the right ear and the gelding was having difficulty raising his head above the horizon. There was no knowledge of recent trauma. When examined, the gelding WAS walking and the "strange" gait was better described as moderate ataxia in all  limbs. The gelding was able to elevate his head with assistance but there was minimal lateral movement of this cervical spine. 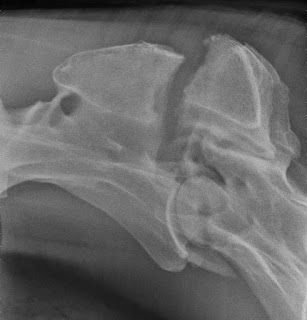 The radiographic exam revealed a catastrophic fracture of cervical spine #2 (C2), also known as the axis. The fracture line (yellow line) appears to travel directly through the spinous process of  C2 and through the body of C2. Centered in the body of the cervical spine is the vertebral canal which houses the spinal cord. Typically, an injury to this region of the spine results in trauma to the spinal cord and varying degrees of neurologic deficits. 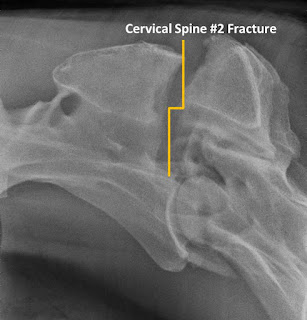 Due to the severity of the fracture in this case, one might have predicted that the trauma to the spinal cord would have resulted in severe neurologic deficits such as complete recumbency or even sudden death! Although the gelding was still standing, there was significant instability of the cervical spine and the prognosis for life was poor, hence humane euthanasia was elected. 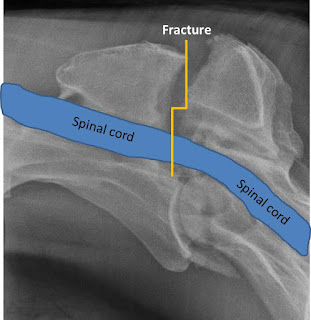 Posted by Michael Porter DVM at 7:29 AM 2 comments

The supplements imaged above are both considered "performance enhancing" drugs and are banned from use in horses of all disciplines!! Why am I posting this information you ask? Please take a moment to read the story about "Humble" the pony that was recently published in The New York Times. This pony died suddenly at a major horse event after being administered an injectable "supplement" by the horse trainer. A published medication sheet indicated that the pony was treated with Estrone, Depo Provera, Banamine, and Dexamethasone multiple times in the 48 hrs preceding his sudden death! The medication that was administered just prior to the pony's sudden death was not listed and remains unknown.

If this story does not upset you then read about all group of polo ponies that died due to an over-dose of a supplememt called Biodyl. This supplement contains vitamine B12, selenium, potassium, and magnesium. Oddly enough, this supplement is very popular in the illegal sport of rooster fighting!!

These stories are examples of the gross and inappropriate actions by horse trainers and veterinarians with regards to the type and frequency of medications given to show horses. Some supplements are "home made" such as Carolina Gold and there is no telling what substances are mixed into the bottle. Other supplements are FDA approved medications such as Magnesium Sulfate which are used in appropriately in horses to enhance performance. Too often, the result of excessive use is sudden death due to cardiovascular collapse.

I urge to know exactly what your horses are being treated with and ask the question "why". Please read below about the product called "Carolina Gold". Although this drug has not been associated with sudden death, it is illegal and its use may result in hazardous riding conditions!

The active ingredient in "Carolina Gold" is known as Gabapentin or "GABA".  When administered, it acts as an inhibitory neurotransmitter and therefore has the potential to be anxiolytic, analgesic, anticonvulsant, and sedative. In human medicine, GABA containing drugs are prescribed for epilepsy and neuropathic pain. Adverse side effects include dizziness  fatigue  and drowsiness, to name a few.

In veterinary medicine it has been used sparingly to control seizures in foals. In addition, it has been classified as a class 3 performance enhancing drug by the Association of Racing Commissioners International. Interestingly, this product was introduced into the performance horse world as a means to "calm" horses just before entering the show arena! In February of last year, the USEF officially banned this product from you in performance horses.

Posted by Michael Porter DVM at 6:58 AM 6 comments