The two bags of horse feed shown below were produced in IONOPHORE-FREE mills!! Why is this important?? 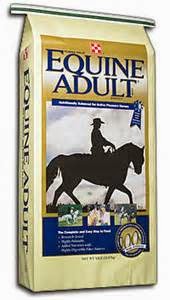 In the past year there has been at least two well publicized cases of horses ingesting feed that was contaminated with a common supplement for cattle known as ionophores. The first case involved a barn full of horses in south Florida which ingested contaminated feed. Initially, three horses died however the remainder of the 22 horses were expected to eventually die due to the toxin in their feed.http://www.sun-sentinel.com/local/broward/fl-sick-horses-davie-20141121-story.html  The story is heart breaking however it could have been prevented.

Recently, there was another reported incident of horses becoming ill and dying from contaminated feed. http://www.poisonedpets.com/deadly-horse-feed-still-sale-adm-alliance-refuses-pull-feed/ . Once again, the feed appeared to be contaminated with the supplement for cattle, ionophores. Ionophores are extremely toxic to horses and attack the muscle of the heart. If the horse does not succumb initially, it is likely that the diseased heart muscle will slowly weaken resulting in heart failure and death.. How can horse owners and trainers avoid the possibility of such a tragic occurrence?? By purchasing horse feed from ionophore-free mills. Most feed companies produce feed for various types of livestock including cattle and horses. In addition, it is common practice for some feed companies to produce cattle and horse feed in the same facility. These feed companies practice techniques to "flush" the cattle supplements out of the system prior to producing the horse feed. Clearly, there is room for error. The solution is to buy feed from documented, ionophore-free mills. If your horse feed representative is not capable of saying the words "ionophore-free mill" then its time for a change in feed!!!